Former Vice President Joe Biden is president-elect. The changing of the guard will bring a change in policy, management, vision, and action for the Department of State and the Foreign Service.

With everything still relatively early, let’s take a fun, and by no means official, look into what the future could entail.

Let me know what y’all think in the comments.

First and foremost, new leadership. Mike Pompeo, the current Secretary of State, will leave office come January 20th. Who will be his replacement is a big question.

Earlier this week, the Biden-Harris agency review teams were published.

“Agency review teams are responsible for understanding the operations of each agency, ensuring a smooth transfer of power, and preparing for President-elect Biden and Vice President-elect Harris and their cabinet to hit the ground running on Day One. These teams are composed of highly experienced and talented professionals with deep backgrounds in crucial policy areas across the federal government. The teams have been crafted to ensure they not only reflect the values and priorities of the incoming administration, but reflect the diversity of perspectives crucial for addressing America’s most urgent and complex challenges.”

The “team lead” is Linda Thomas-Greenfield. She works for Albright Stonebridge Group as a Sr. Vice President. Before joining the Group, she served 35 years with the Foreign Service, and along with many distinctions, served as ambassador. 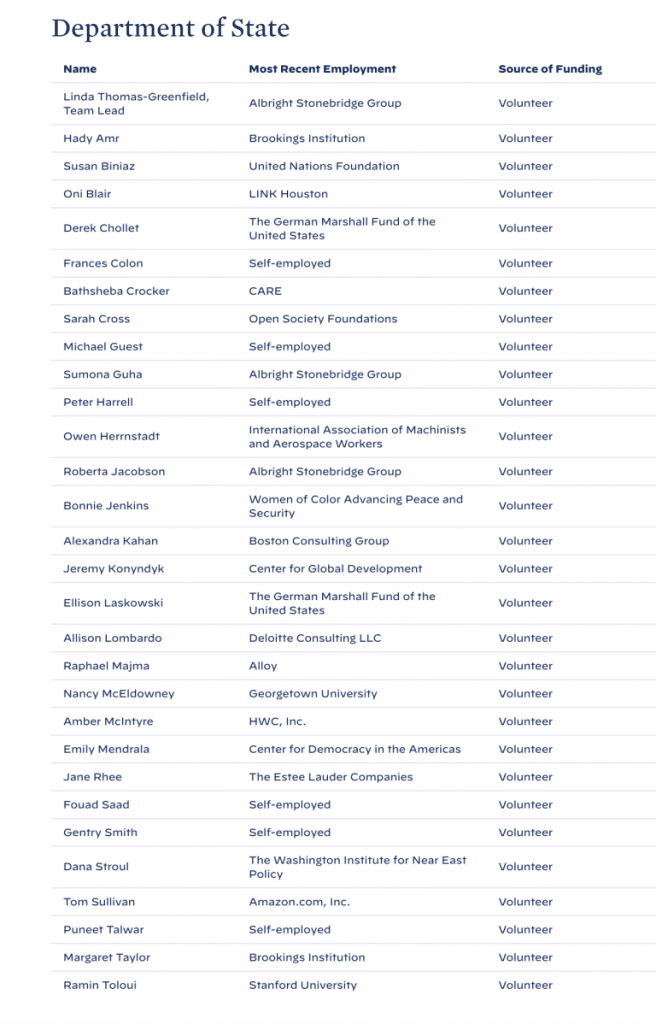 I’ve only looked up a few of the names, but so far several served in the Foreign Service in one capacity or another.

As for who will take the top spot at the Department of State, there are a few contenders who have been listed by the media and other sites. They include (source):

SUSAN RICE: A former national security adviser, Ms. Rice was among the small group of women Mr. Biden considered for his running mate. Ms. Rice is a former assistant secretary of state and United Nations ambassador, and she is viewed as a leading expert on Africa.

CHRIS COONS: A leading member of the Senate Foreign Relations Committee, Mr. Coons hails from Mr. Biden’s home state and is one of his closest friends. Mr. Coons would most likely be easily confirmed because of his collegial relations with Senate Republicans. One downside: Mr. Coons could be invaluable to Mr. Biden as a steward of his agenda on Capitol Hill.

WILLIAM J. BURNS: Mr. Burns, president of the Carnegie Endowment for International Peace, is a retired foreign service officer and former ambassador to Russia and Jordan. A former deputy secretary of state and special assistant to Secretaries Warren Christopher and Madeleine Albright, he is also a contributing writer at The Atlantic.

If I had to make a bet, given these four, I’d say the choice will be Rice. But honestly, I don’t know. If we look at the “experts” of Reddit and PredictIt, they are also betting on Rice.

A couple more months to go.

We’ve already heard from Former President Obama that Biden is “gonna have to rebuild a State Department where some of the best people have been driven out systematically because they weren’t willing to tow Trump’s ideological agenda” (Pod Save America).

Additionally, having served multiple times as the Chair of the Senate Foreign Relations Committee, I think it is a safe bet to say that Biden will strengthen U.S. diplomacy and the Department of State during his administration.

The Center for American Progress, “an independent, nonpartisan policy institute dedicated to improving the lives of all Americans, through bold, progressive ideas, as well as strong leadership and concerted action,” recently published an interactive database of nearly 250 recommendations for the Biden administration. It is titled “The First 100 Days: Toward a More Sustainable and Values-Based national Security Approach“.

Within the database, three State Department employment recommendations stand out.

Propose to fund 1,000 new State Department full-time equivalent (FTE) positions to rebuild U.S. diplomacy
The State Department has been gutted over the past decade, first due to austerity and budget sequestration and more recently as the Trump administration sought to cut the department’s budget and push out public servants en masse.

The next administration should request an increase of 1,000 FTEs to grow America’s diplomatic presence overseas and begin rebuilding a more diverse State Department workforce, aligned to emerging or under-resourced threats as defined in the OPM human capital initiative, discussed above.

Half of these slots should be reserved for climate-related positions, as discussed in the “Tackling Global Challenges” section of this report.

Launch an effort to immediately recruit high-quality State Department employees
Concurrently with the review of personnel, the secretary of state can direct some immediate changes to ensure a high-quality pipeline of talent to meet the talent acquisition priorities identified by the 100-day review. These immediate steps could include:

Basically, a hiring surge and improve the pathway into the field, both of which are very much needed, in my opinion.

If you took heed of my January recommendation to most definitely take the FSOT in 2020 if you believed Biden would win the presidency and have hopefully progressed past the Orals, then I think you are sitting pretty on the Register (even if you have a low score). If there is a hiring surge, potentially almost all on the lists could be picked up—a fun thought.

However, recommendation and reality are two intrinsic forces that tend to compete with one another.

First, there is the pandemic. A-100 and Oral Assessments have been delayed this year, which means there is much backup. Though an A-100 class did occur online and Orals have resumed for November, State is still behind.

Second, funding. A lack of travel due to the ‘Rona means a lack of income for the department through visa fees. Additionally, any money requests will have to go to Congress. Depending on the make-up of the Senate, how money is dedicated will be a crucial fight.

And third, the great unknown.

The Biden administration has made many promises. Because of that, I think we will see a renewed focus on increasing the number of hires, perhaps the hiring surge of 2010 numbers, and a continued focus on improving the diversity of its diplomatic corps.

If you are currently on the Register, and will not time out before June, then I think you have a good chance of moving forward.

Only time will tell. Let me know what y’all think.

9 thoughts on “What does a Biden administration mean for the Foreign Service?”