I have reviewed data on the State Department website, and I am ready to make a prediction for the upcoming fiscal year (FY).

This is part two of a post I wrote recently titled:

What is the Foreign Service Hiring Data per Cone for Generalists and Specialists?

I fully suggest checking that one out first!

All right, let’s just dive into it!

For FY 2016 I predict lower hiring rates of both Officers and Specialist.

Specifically, I predict the following:

If accurate, these will be the lowest known hiring numbers. By ‘known’ I am referring to the data that has been made available (back to 2010): 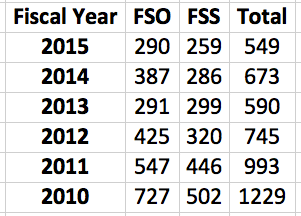 Compared to last year, this is a drop of 90 FSO hires and 73 FSS hires.

COMING UP WITH THE PREDICTION

I came up with these numbers by drawing on two data sets.

As far as I can tell, making the information public is something new they have only been doing over the last couple of years. I have requested more historical data, but the moderators of the forum will only disclose back to 2010.

Second, by looking up the budget.

It is buried, but the State Department does disclose these financial documents online, and it can be found here:

I looked at the ‘Executive Budget Summary, CBJ’ section in particular and then within each paper I searched for the “Department of State Summary of Appropriations Enduring Budget” table. I chose this table because it is the most consistent throughout the years and lays out the ‘Actual’, ‘Estimate’, and ‘Requested’ budget information.

The four primary allocations in each request are:

After I had pooled together the data, I decided to look specifically at the ‘Administration of Foreign Affairs’ line item to determine FSO and FSS hiring rates.

After some slight reorganizing, you get the following nice looking table: 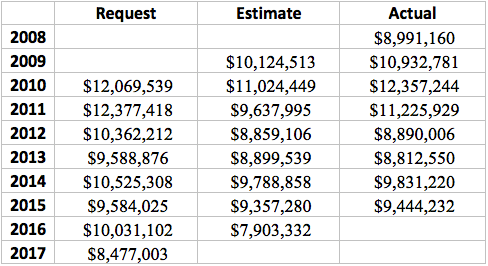 I next wanted to compare the % change between each value: 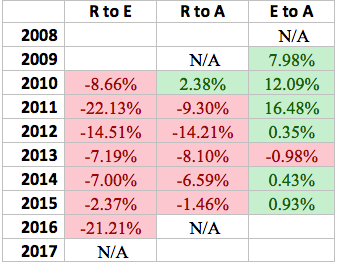 Some things that stand out:

I am going to bank on point number three for my prediction.

This is the lowest budget compared to the last eight fiscal years, which have an average budget of just over $10,000,000,000.

Even with a predicted budget, determining hiring rates with these numbers is difficult.

Currently, there is a rumor going around that State is only hiring at attrition. I have no way of validating (State Department Human Resources or BEX representatives who are reading please way in), but I do know hiring rates have been depreciating annually. Additionally, if my numbers are correct, we will be hiring at nearly a fourth of the amount as FY 2010, during the hiring surge.

Now, I did a few calculations, and I could not find a high correlation between the monetary value of the ‘Administration of Foreign Affairs’ line item and hiring rates.

The best relationship I found was looking at the % change between each hiring cohort as it relates to the budget.

However, since the predicted actual budget has a drop similar to the change in FYs 2011 to 2012, I used percentage changes closer to this to come up with my numbers.

Now, I know some of you are thinking, but Jack we want some hard calculations.

Unfortunately, I cannot provide it. I can only offer the best guess as there are no strong correlations and the sample size is small.

However, what I can do is provide all the data I collected. The link below will take you to a shared Google document where you can view the information and then copy it to your own Excel (or equivalent) sheet.

If you have your own prediction, make sure you share it in the comments with a description of how you came up with it!

I look forward to your contributions!

This was a time-consuming project and one that I could not predict until recently when the FY 2017 budget was submitted. I will not know the actual amounts until the fall of this year, once the FY has been closed out.

When the numbers are made public, I will allow myself a +/- of 10 for each category, and a +/- of 20 for the total, to consider having made an accurate prediction.

I do look forward to learning, from whichever outcome, and trying to determine it once more next year!