With the opening of the Cuban and US Embassy on each other’s state, this seemed like a timely and informative post to write.

Quick question for you, if you visit an embassy are you technically on foreign soil?

Think you know the answer?

Keep it in mind for now. I’ve got a couple of stories for you first.

Story 1
A few days ago I was hanging out with a friend of mine from Argentina. She was visiting Washington, DC for a conference and loved the weather, compared to what she was experiencing in TN.

Taking advantage of the 70 something climate, she decided to walk around Dupont Circle during a break in her conference. She came across the Argentine Embassy and got excited.

Running into the driveway she did a little celebratory jump, popped a big smile, and then ran out.

Later on that day we met up and she told me she was just on Argentine soil earlier that morning. I asked what she was talking about and she described what she did.

This then started a conversation on whether or not she was actually on foreign soil. In the end it didn’t matter, she was happy about it and I was happy for her.

Story 2
When I lived in Kenya I would sometimes run into the marines at the bar, who guarded the US Embassy, and join them for a drink. Most of their days were the same: guard the mission, do PT, do training scenarios, and other marine life activities (including popping wheelies with the golf cart).

Every now and then they would have an interesting story and this is one of them:

Like every weekday morning, a number of Kenyan nationals stood in line to enter the embassy seeking a meeting with the Consular section to go through the process of acquiring a visa. On this particular day, a pregnant lady far along and near the end of her 9-month period was in line, and the line was a long one.

She eventually entered the embassy (the entrance to speak with the consular section is different than the main entrance) and excused herself to visit the bathroom. What followed was a first time experience for all involved.

Either naturally, or induced, the woman gave birth to a son in the bathroom. “She went in with a bump, and came out with a baby” is how one marine described it. The lady then proceeded to state that her son is a US citizen because he was born on American soil (the US Embassy bathroom), should be given full rights, and the pair of them flown to the US.

The next few hours were a delicate balance of diplomacy between the marines, the consular section, and the woman as they tried to determine next steps.

Do you think the baby was born on US soil?

The best place to find answers to the above stories, and the question overall, is with the Vienna Convention on Diplomatic Relations 1961.

Within this convention, Articles 21-25 have to do with embassies, though more specifically diplomatic missions as a whole.

Article 21
1. The receiving State shall either facilitate the acquisition on its territory, in accordance with its laws, by the sending State of premises necessary for its mission or assist the latter in obtaining accommodation in some other way.
2. It shall also, where necessary, assist missions in obtaining suitable accommodation for their members.

Article 22
1. The premises of the mission shall be inviolable. The agents of the receiving State may not enter them, except with the consent of the head of the mission.

2. The receiving State is under a special duty to take all appropriate steps to protect the premises of the mission against any intrusion or damage and to prevent any disturbance of the peace of the mission or impairment of its dignity.

3. The premises of the mission, their furnishings and other property thereon and the means of transport of the mission shall be immune from search, requisition, attachment or execution.

Article 23
1. The sending State and the head of the mission shall be exempt from all national, regional or municipal dues and taxes in respect of the premises of the mission, whether owned or leased, other than such as represent payment for specific services rendered.

2. The exemption from taxation referred to in this article shall not apply to such dues and taxes payable under the law of the receiving State by persons contracting with the sending State or the head of the mission.

Article 24
The archives and documents of the mission shall be inviolable at any time and wherever they may be.

Article 25
The receiving State shall accord full facilities for the performance of the functions of the mission.

Above you will notice I bolded a few phrases, all in Article 22, which have to do with mission sovereignty. Let’s break it down:

1. The premises of a mission shall be inviolable

2. The receiving State is under a special duty to take all appropriate steps to protect the premises of the mission against any intrusion or damage and to prevent any disturbance of the peace of the mission or impairment of its dignity

If you visit the US Embassy, especially in more dangerous parts of the world, you will see the exterior of the mission being guarded by local nationals. The inside will have a marine detachment, but the outside will either be local police or military.

Now, in my experience, the words “protect… mission against any damage and to prevent any disturbance of peace… or impairment of its dignity”, have been interpreted differently depending on the situation.

Story 3
I’ll keep this personal story short, because it deserves an entire post to itself. The year was 1999 and NATO had accidently bombed the Chinese Embassy in Belgrade. The response of Chinese protests was almost immediate and approved by the Chinese government. For a week, thousands of students were brought and dropped off by bus to protest all day around the US Embassy compound (England, Australia, and a couple of others also experienced protesting, but not as many).

The Embassy was under a constant barrage of rocks, bricks, bottles filled with urine, liquids, paints, and other materials during this time. Though there were Chinese police personnel guarding the entrance of the Embassy, they were not protecting against “damage… or impairment of [US Mission] dignity”. 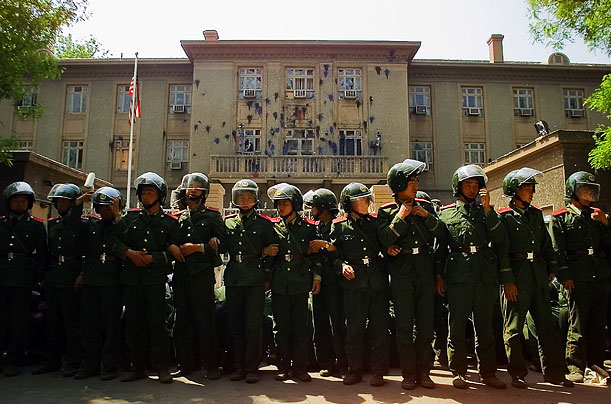 This meant that by the end of the week, the Embassy no longer had a sandpaper color to it, but was now a multicolored mess, and that is putting it mildly. A lot happened during this time: my dad having to go in and out of the embassy during the dark, a CNN reporter being beaten with a brick, a close call between marines and a Chinese citizen who jumped the fence, and being told to be prepared for evacuation, but I’ll save it for another time.

3. The premises of the mission… shall be immune from search, requisition, attachment or execution

Similar to number one, unless the individual or party is asked to conduct any of the above, it is not allowed by a host country or any entity. The premise, just like the diplomat and their family, is awarded immunity.

If you are curious about what diplomatic immunity entails, read Articles 29-41.

Is the embassy territory sovereign territory?

Hopefully by now you have an idea of the answer, which is no.

In story 1, my friend did not jump for joy on Argentine soil, in story 2, the baby does not become a US citizen, and in story 3, US sovereign territory was not attacked, but the US mission was.

Does the embassy enjoy immunity though? Absolutely!

It is this immunity that most likely confuses folks when it comes to sovereignty. The mission is protected and is considered US property, but the territory does not belong to the US (or any other country with an embassy). Again, the Vienna Convention does not state that the property belongs to the embassy’s country.

Though the immunity can be violated, for the most part it is respected. Without such immunity, the life of a diplomatic would be more difficult during times of aggression within and between countries.

So, did you know the answer?

23 thoughts on “Is an Embassy on Foreign Soil the Sovereign Territory of the Host Country or the Embassy’s Country?”