If you have been following the blog for some time, then you know I enjoy learning this information and presenting it to you visually. I’ve done it for the last two years and find it an important tool to gauge the health of the Foreign Service. Additionally, I think it is a great measure to compare available opportunities (or the lack of opportunity) for aspiring Officers and Specialists.

The data, which was made available on the Foreign Service Forum (if you follow the link, you will notice that I requested this data over a month ago (Jan. 3), and it took multiple check-ins before the moderator(s) provided the information), should not be a surprise if you have been keeping up with the news. 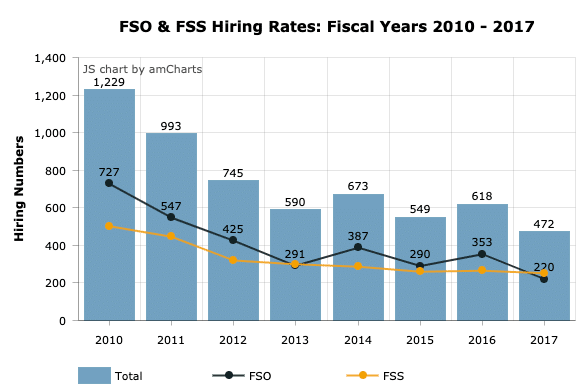 The FSO program saw a big decline from the previous year, and continues its overall downward trajectory since 2010. It looked as if it might have been leveling out, but with the new administration a new direction was chosen. Expectation for FY 2018 is continued decline in FSO hiring numbers.

The FSS career is more “stable”, in the sense that even though fewer numbers were hired, and there is decline, there is stronger consistency when compared to the FSO. I am interested to see how this continues.

I fully admit that the above paragraph is from what I have heard in the “rumor mill”, so I welcome constructive comments if you know better, and I will edit as applicable.

It is also important to note that the FSO numbers provided do not break down how many folks were hired after going through the FSOT process or a fellowship (e.g., Pickering).

As always, I welcome your thoughts.